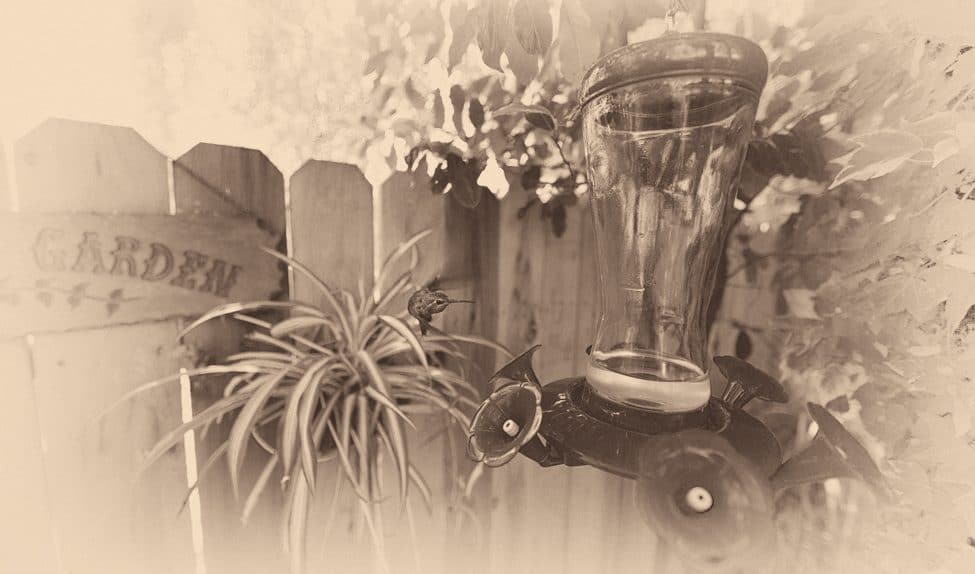 Stayed home all weekend, playing around with Photoshop.

Then this afternoon, I set the camera up near the hummingbird feeder.

This is about as close as you can get this camera to the feeder with a 14 mm f/2.8 L-series lens.

I set up my heavy-duty gazillion-ton tripod, with the camera attached to my CamRanger, so I could control the camera from the iPad. We sat around the patio table, reading, etc., and I just watched for hummers every once in awhile.

The hummers were disturbed by the camera. We were there, though, for quite a long time. Once in awhile, they’d zoom in, kind of check out the camera, and act like they were trying to “sneak by” it to get to the feeder. We’re talking this thing was probably around six-to-eight — maximum 10 inches — away from the feeder. I deliberately did not take pictures, or adjust the camera in any way, on every pass. I figured if I did, the hummers would eventually just decide that the feeder was too scary a place to be.

The camera had trouble focusing where I wanted it, so I set it up by trying to focus first on the fence, then on the body of the feeder. Then I noticed there are actually arrows on the CamRanger software that allow you to adjust the focus “manually” by small, medium, or larger increments. I used the “small” adjustments repeatedly to get where I thought the hummers would most likely show up. To gauge this, I zoomed the iPad in on the “flower” on the feeder that the hummers seem to like the most. This zooming-in of the iPad does not impact the framing of the shot, which is controlled by the fact that the 14mm lens I was using is prime.

This guy came zooming in from behind the camera, then turned to look at it. You can see I caught him in the middle of his turn.

I sharpened the image in Adobe Lightroom 5, and I also did the conversion to black-and-white in Lightroom. During that conversion process, I tweaked the various colors, lightening the ones I thought would dominate in the fences and foliage, while darkening those that I thought predominated in the hummer. (Interestingly, “magenta” had the most impact on the hummer’s wings!) My goal was to try to get the hummer to stand out as much as possible against the background, since he was so small, and I did not want to crop the image.

The image was then brought into Photoshop with the Lightroom adjustments applied. After that, I used the Nik Silver Efex Pro 2 plug-in, applying — if I recall correctly — the Antique Plate II treatment. I then did individual adjustments to numerous sliders, and added a “U-point control” to the hummer himself, altering various characteristics on him in an opposite direction from what I did to the overall image. I thought about doing a little more careful dodging and burning with a 50% gray-layer, but that was more work than I felt like for this image, which will probably not be printed. While I like the image, I don’t consider it of a quality that I’d ever enter it in a contest, or hang it anywhere. The hummer is just too small relative to the full composition.

Notwithstanding the incredibly small portion of the image taken up by the hummer, though, I think it’s still interesting.

What do you think?