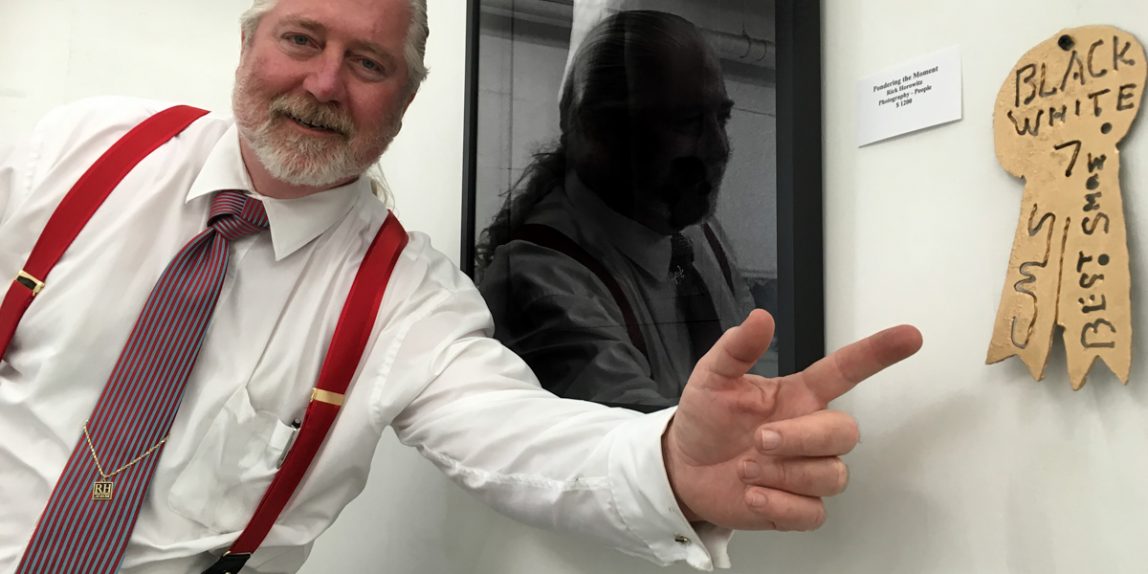 The title kind of says it all, doesn’t it?

Last night was ArtHop™ in Fresno, as you know if you read yesterday’s post.

I had a shared exhibit – myself and a few other wonderful artists – over at The Vault.

The Vault, for those who don’t know, is an actual bank vault area in the former Security Pacific Building on the Fulton Mall in downtown Fresno. The building is a beautiful old one which is currently undergoing restoration. From what I understand, it will be – and to some extent already is – the site for parties, including weddings, as well as other smaller parties (such as if someone rents out The Vault), as well as lofts, offices, and I don’t know what else.

There is a really large ballroom area, which I think must have once been the bank proper. And from what I understand, it is the location for many a wedding party these days.

In the area of The Vault – which is downstairs – there is the vault itself, and several spaces outside the actual vault. One room is the “pool room,” and then there’s an equal-sized room right next to it. I had the pool room, plus a little over half the other room.

After a very minor setback, during which I was accused of spreading bad juju because I became overly-worried – note, Sandra, I just did say “overly-worried” – the show was a big success. In addition to enjoying sharing my art, and talking with people who clearly appreciated what they were seeing, three people asked about purchasing one of my images, and it sounds like more than a few folks – female, and male – might be interested in a photo shoot.

But what this post is really here for is to tell you what happened at another ArtHop™ event last night.

Over at Chris Sorensen’s Studio, they were holding the Seventh Annual Black & White Exhibition. This is a juried exhibition, meaning you submit your works for judging, and awards are awardinated. There are numerous categories, including not just the usual separation of Sculpture, Glass, Mixed Media, Painting, and Photography. Within the larger categories, like photography, there are subcategories. I didn’t do a comprehensive list, but I did notice that there were at least Landscapes, and People, as subcategories.

Side note: Last year, I won 1st place for an ocean landscape, an image of Thor’s Well I took on a trip through Oregon the month before.

After these positions are decided for every category, and subcategory, the judges then take all the 1st place winners, and judge them against one another, regardless of categorization. So sculptures are compared against photographs; landscapes against people; and so on.

Now, ever since the day I shot it, this has been one of my favorite images. The woman is beautiful. The lighting is heavenly. The mood is perfect. I was very proud of the look I got out of this. Some folks have said they didn’t care for the pose. But I’ve loved the whole thing since Day One.

The subject of the image herself, when I asked if it was okay to use it, said, “I guess that’s okay. I’m not a fan of that one, though.”

Sometimes, an artist just has to trust his own instincts.

And, hopefully, this is just the first of many Best of Show awards to come.