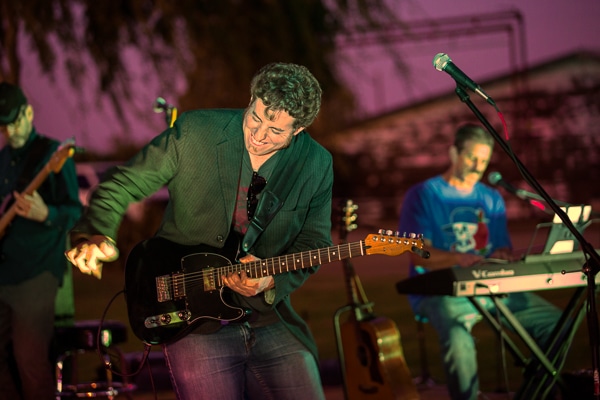 Anyone following this blog lately knows that I’ve been shooting a lot of bands.

As you might expect, I typically shoot at night. Sometimes the venue is indoors. More often than not, outdoors. Regardless of the venue, it’s almost always a “low light” situation. I’ve invested a lot of money in “fast glass” because I don’t want to distract either the band, or the people who may have paid to see the concert by using flash.

This past weekend, I was shooting at Engelmann Cellars for the first time. As their website notes:

The venue is beautiful, but there was one — for me — huge downside: the lighting.

Even though I’ve gotten used to shooting in low light, without flash, this took it to a new level. To make matters worse, what light there was, was colored either a deep blue, a brilliant green, or an overpowering red that would no doubt have done Krypton proud.

But I’ve learned a couple of interesting tricks in Lightroom 5, and they start with sliders. By going into the Color panel in LR5, you have a choice of manipulating Red, Orange, Yellow, Green, Aqua, Blue, Purple, or Magenta independently. Click on the HSL (Hue, Saturation, Luminance) panel, if you’re not sure which colors to target, and you get access to another little doohickey that you can click, then position over the image and drag up, or down, to change — you guessed it! — the hue, the saturation, or the luminance of that part of the image.

For a little additional fun, I took the image of Adam C. Myles above into Photoshop, then used the Color Efex Pro 4 plug-in. I can’t tell you exactly what I did there, because I forgot to take notes — and it involved choosing a pre-set, but then tweaking the sliders to get what I wanted.

I didn’t transform all the images I shot at Engelmann’s. For one thing I don’t have that kind of time.

But, for another, even though it’s not my cup of tea, there are people who like the unnatural colors you get from concert lighting.

So take a look, and feel free to comment below to let me know which type of shots you prefer.