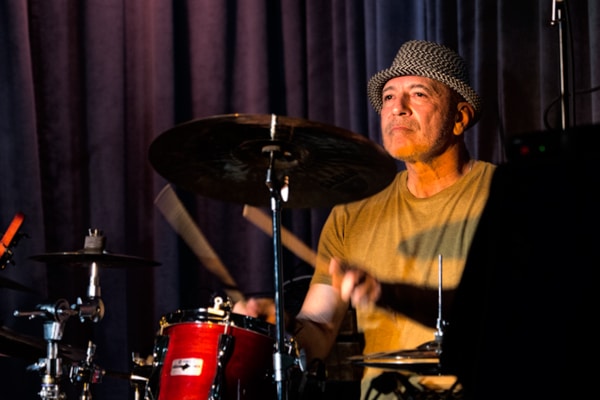 Well, you didn’t really think I was going to call him “Drummer Boy,” did you?

You think I want a thump on the head with one o’ them sticks? (I guess I could have called him “Stick Man,” but that has its own set of problems.)

Anyway, another shot from the recent Blu J’z opening for Double Play.

I find that drummers are frequently the hardest members of the band to get a good shot of. For one thing, they’re often stuck way in the back, and the other band members frequently are standing right in front of them when I want a shot. Any telephoto lens that will reach far enough to pluck them from beneath the armpit, neck of a guitar player, and through the myriad cymbals and stands of the drum set, will frequently run into a problem common to most of the cheaper telephoto lenses: variable aperture, which, on full extension just cannot open up enough for the dark club atmosphere. Unless a spotlight is hitting the drummer when you shoot (or you add a little “darkroom magic”), you’re just not going to get a good shot.

Add to that the desire to catch the motion and energy of the drumsticks without sacrificing the overall quality of the shot…it’s tough to get the beat just right.

For more bands — including more shots of the Blu J’z — remember to check out the Band galleries.