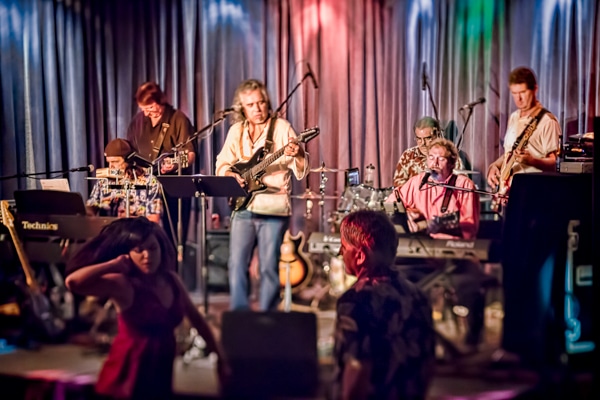 It seems like lately the best opportunities I get for shooting that interests me comes from gigs and concerts.

This weekend was no different.

Friday night, Q-POP Radio Band, a tribute band that plays hits from 1964 to 1974, was playing at Frank’s Place in downtown Fresno.

Frank’s Place is a part of the Warnors Center for the Performing Arts, but it’s comes across as a kind of nice, clean, spacious bar with a stage and live music. It’s a great venue for enjoying a drink or two — at least one gentleman who entertained himself and others on the dance floor obviously figured that out — and listening to great music.

As noted, there is a dance floor.

I’ve been to Frank’s Place previously to shoot the Blu J’z, and have found that it’s just as wonderful a spot for a band photographer as it is for music aficionados. The lighting is low, but I have lots of “fast glass,” so I don’t mind it at all. The lighting is otherwise not too harsh, such as I’ve seen in some bars like Audie’s Olympic; you can get some pretty good shots without having to worry that a particular musician is going to come out looking like he’s been dipped into Psychadelic Red Dye No. 5. In fact, the colors of the lights at Frank’s Place add a nice complement to most shots. (Nothing against Audie’s as a live-music bar! It wasn’t built to be photographer-friendly, but for people to come and enjoy drinks, dancing, and great music!)

About the only negative to shooting at Frank’s Place is the difficulty in getting a clear shot of the drummer, who usually is placed at the back, and, due to the angle of the stage, is essentially tucked into a corner. (There’s a ramp around the back they allowed me to use, which takes you right up to the edge of the stage. At some venues, I actually am allowed on-stage, but due to the small size of this one, I did not try it here.)

The crowd is usually friendly, and Friday was no different, with one couple actually borrowing my iPad for awhile to look through all my galleries. (Don’t forget the “Buy” button allows you to purchase prints, folks!)

At Friday’s “gig” — Bunny Chafowitz has informed me it is not properly referred to as a “concert” — I decided to do a little experimenting. The image above was taken, as usual these days, with my Canon 5D Mark III. The lens, however, was unusual: a Canon TS-E90mm f/2.8; i.e., a tilt-shift lens.

The fact that the plane of focus is parallel to the back of the camera means everything at the same distance is in focus, while everything in front of or behind the prescribed depth-of-field is out-of-focus. But with the TS-E90mm, I’m able to run the plane all over the place — not just parallel to the camera back — to give myself more artistic license regarding the final product.

Notice, in particular, how the middle of this image is in focus, while the top and bottom are not. The result is that the heads of the dancers in the foreground are in focus (less so on the woman, because she’s shorter), and the heads of the seated keyboardists and drummer are in focus, as well as the guitars of the standing guitar players. But the guitar players themselves are — excepting for their mid-sections from about their waists to their shoulders — out of focus.

For this shot, I manipulated both the tilt and the shift. I’ve had people tell me that using the shift along with the tilt doesn’t really do anything, but I absolutely disagree. For one, it doesn’t make sense that it wouldn’t have an effect; for another, from my own observations I feel like it does give my images a different look. I cannot recall for sure, but this shot may also have had a little rotation to it. If so, it was very slight, as you can tell by the plane of focus pretty much cutting right through the middle of the picture.

The RAW image was also manipulated in both Lightroom 5 and Photoshop CS6 (with Topaz Labs plug-ins). The manipulation included a little dodging, a little burning, a little digital painting by hand focusing on particular areas, to come up with this unique image.