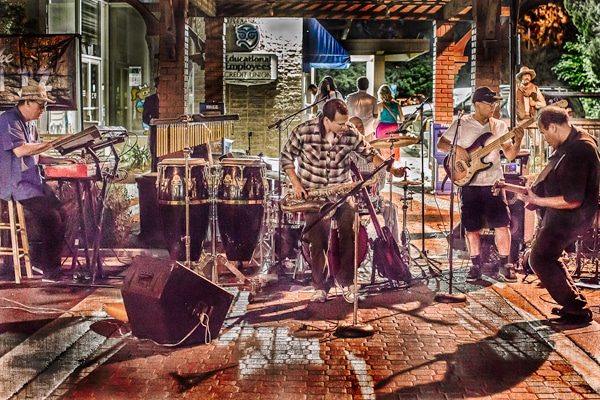 Bunny Chafowitz won two tickets to the Clovis Wine Walk. So natch, I went along with her.

We had a wonderful time, but mostly due to the boys playing in the middle of the street: The Blu J’Z.

I hadn’t planned on shooting any bands tonight, so I didn’t have all my equipment with me. Not that I think they would have appreciated my flash going off in their faces, anyway. And I didn’t really shoot much of the band until it got dark.

The image on this page was shot with my newest lens, the Canon EF50mm f/1.2L USM. Due to the darkness, I was shooting at ISO 20,000 and 1/60th of a second at f/3.5. Again due to the darkness — combined with extremely bright backlighting — and the heavy grain that resulted, I decided to do a more painterly effect, rather than simply render the image as it came out of the camera.

Apparently, my post-processing was a success. Bunny couldn’t stop telling me how much she liked it.

I hope the band does, too. Maybe some day they’ll give me a chance to shoot them under better light.

More images of The Blu J’Z are available in the gallery.