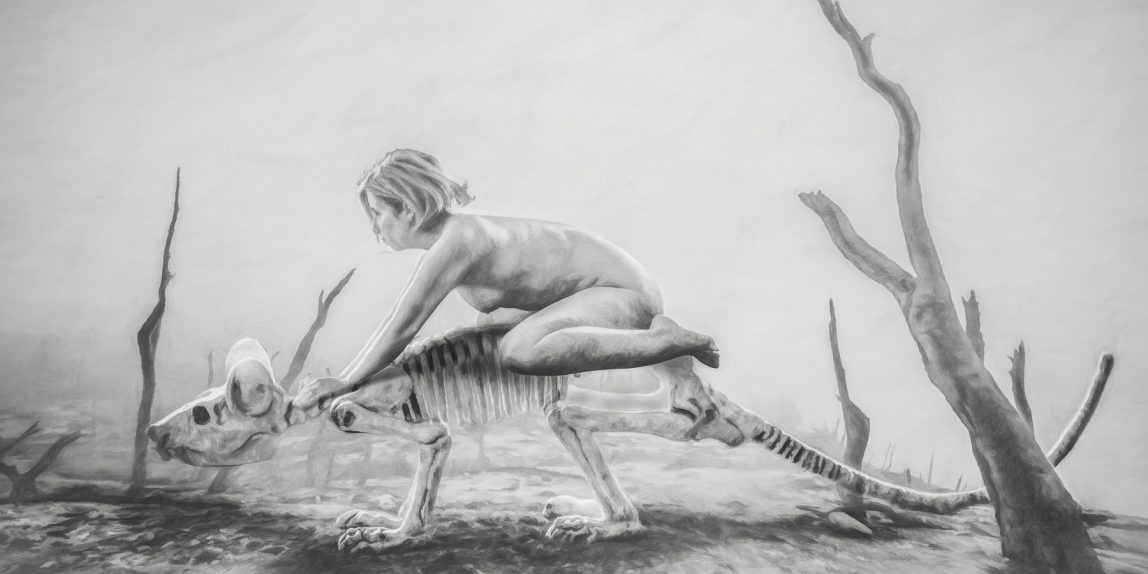 This piece is called, “Rat Patrol.” The name was going to be “Desolation,” or “Desolate Rider,” but one of my friends suggested that it seemed as though my lady was on a mission. So I floated “Rat Patrol,” and about six of my friends said, “Yes!” (Afterwards, I briefly regretted not calling it “Naked Mole Rat.” Briefly.)

In any event, this is my entry for the Sorensen Studio’s (January) 2019 Black & White Show, which is a part of ArtHop™ in Fresno, California.

Surreal nudes are my favorite form of art. If I do say so myself—and I don’t, from what I’m told—I’ve gotten pretty good at it.

It’s a shame, though, that I’m stuck living in Fresno. Not a popular area for anything naked. Fresno is a bit like a real-life version of Facebook, and freaks out over anything that includes a female nipple.

The conservatism of Fresno means that it’s darned-near impossible for me to be able to exhibit my work. The Sorensen Studio allows it, but that seems to be about the only place left I can show. I’ve had my own shows in the past, and they did include nudity. But at least one of the venues has told me that I couldn’t get another show because “families with children.”

God forbid some child should see a nipple, or other nudity, in a work of art. Parents might be forced to teach them what human bodies look like without clothing. (As if they can’t see it themselves in the mirror, or walking in on their parents or siblings, or playing doctor, or owning an iPhone….)

In any event, I haven’t had a show in a while, because I can’t find a local venue. And, as I’ve no contacts outside Fresno, I wouldn’t know how to get a show anywhere else.

Another difficulty in having my studio located in Fresno is that models are tough to come by. Partly, this is my fault, as most of my work has been what we call TFP, or “Time for Prints,” or maybe what I should now call “TFDP.” That is, “Time for Digital Prints.” (I’m open to either, by the way, if you happen to be interested in being a part of one of my art pieces.)

The problem with paying models is that, frankly, I’m already dumping a ton of money into my photography without any kind of return. Sure, occasionally I win a money-contest, like Nudes in November. The prizes there do not cover the cost of framing even one of the prints. (If you’re from the Sorensen, I’m not complaining. I’m just stating the fact that I’m not going to get rich off winning prizes. I’m quite happy with the Sorensen.)

Because I believe framing can either add to, or detract from, a printed image, I use only the best framer in Fresno: Tarry Rolff, of Rolff’s Gallery & Picture Framing. Tarry has become a good friend—Rat Patrol was finished at 1 a.m. last night, and Tarry framed it for me so I could submit it at noon today—but it’s still anywhere from $200-$400 per framing job, depending on what’s done.

Then there’s my studio. I won’t say what the rent is, but suffice it to say that it’s almost not worth keeping it, given that I only do a few photoshoots per year in there. It’s almost like a glorified storage space for my photographic equipment. But, again, I am quite grateful to Rick Roush, of the T. W. Patterson Building, for allowing me to be there. If you’re looking for a place to rent space, you should check out the Patterson. (Just, please, don’t try to take my space!)

But I digress, a little. I was saying that it’s tough to find models. And while part of that is the TFP/TFDP approach I’ve always taken, another part of it is that Fresno does not have a surfeit of people who are willing to strip for the camera. I’m sure there are all kinds of reasons for that. Nevertheless, I do wish I lived closer to somewhere like San Francisco.

Overall, I’d have to say that I’ve had pretty good luck, up to now, with models. And one in particular, whom I’ve dubbed “The Most Winningest Model” because so many of my wins have come with pieces we worked on together, has posed for me more times than I can count.

Still, it would be nice to have a more regular flow, so that I could produce more work. Plus, The Most Winningest Model has started talking about retiring.

If that happens, I may end up retiring, too.

Enough of the Whining

Ok, enough with the whining. The piece above was inspired by an old sketch I saw once. I saw it on the Internet, somewhere. I usually save such things, but apparently, I did not save this one.

I don’t know who did it, but in my memory, it was someone like Da Vinci, or Michelangelo. (The style, as I recall, was more Michelangelo.) And it was a sketch. I have no idea what the piece was called. I only vaguely remember what it looked like, but I seem to recall it was either a nude, or partially-nude, woman riding on some kind of skeleton. I’m pretty sure it was an animal skeleton. I don’t think it was a rat. I also am uncertain of this other point, but I think there was a clothed man in the image somewhere, possibly leading them, or walking alongside. I’m not at all sure about that, though. (If you happen to know what I’m talking about, please drop me a comment! If you can tell me where to find the image, that’s even better!)

I shot the Most Winningest Model (MWM) in my studio a couple of weeks ago, but never got around to doing anything with the images. (BTW, Other Model Whom I Really Enjoy Working With, as you can see, it’s not just with you. I’m slow processing images partly because, as you know, I have a full-time day job running my law office, but also because I tend to only work on a few images at a time. As you’ve seen, I’m producing art pieces, not portraits. And I’m grateful that even though you’re eager to see more, you’ve been patient. You will be happy with the end results, I’m sure.)

Anyway, yesterday, I finally decided to shoot the rat. I’d known when we shot the original pose with MWM that I was going to use the rat. So we set the pose up for that purpose.

Last night, about 6 p.m., I started working on the image. Lest you think this stuff is easy, I nearly gave up several times. I run through a lot of hand-processing, with minimal use of plug-ins to help with some global adjustments, and it takes time. I finally arrived at a result that satisfied me about 1 a.m.

Cutting out the parts is done primarily with Photoshop’s Pen Tool, with painstaking clean-up of things like hair being done by masking. Then there’s the whole thing of deciding what goes where, and how best to fit it together. Shadows are painted in by hand, and then I use a Gaussian Blur to make it fade away a little better. This is done using more than one layer for shadows, building it up as I go, until it looks right to me.

The camera had an adjustable 10-stop neutral density filter, so that I could use wider apertures when I wanted.

Finally, when I shot the rat, the same set-up was still in place—I had no shoots in the two-week interval—and I just put the rat on the box that the model had been kneeling upon. (The box, btw, was covered with a black drape to absorb, rather than reflect, light.)

If you’re interested in giving me permission to share whatever work we do together, as noted above, I’ll be happy to give you prints. I print all the work myself, and I use an Epson 4900 printer. This behemoth takes up pretty much my entire desk. Believe me, you’ll love the large prints this thing puts out. (For those who care, I usually use Epson’s Velvet Fine Art Paper, and therefore also print using the Matte Black ink (and, of course, color as needed). The most frequent size I use is 17 by 22 inches. But there are other options.)

Don’t think that I only shoot models, or people who will let me share the work. That’s just the way to get free prints. If you like the work, and would be interested in having me do an image for your home, husband, or whatever, but don’t want it shared anywhere else, I can do that, too. You’ll just have to pay me to do it. Since it’s essentially then a commissioned artwork, please don’t expect the pricing to be what you’d pay for a regular portrait. (Unless, of course, you’re actually contacting me just to shoot a regular portrait. I don’t do those often, but I have been known to.)

See You at the Sorensen!

Well, I guess that’s enough babbling for today. I really should do it more often, though, to build up the content here. Although perhaps I should do so with fewer words.

Don’t forget to pop over to the Sorensen Studio near downtown Fresno on Thursday, January 3, 2019, to see this year’s Black & White Show, and check out the Rat Patrol.