One of the drawbacks of living and shooting the kind of photography I do in an area like Fresno is that it’s not a prime location for finding professional-quality models.

Don’t get me wrong, there are more than a few decent models around here. And more than a few who are willing to put in the work to promote themselves, make it to shoots, and to behave professionally.

But I won’t be the first—or last—photographer who shoots nudes in the Fresno area to tell you that these types of models are vastly outnumbered by the Wannabes and the Never-Will-Bes who nevertheless seem to believe that they’re the next Jasmine Tookes, or Kate Moss, or Kendall Jenner, and a slice of solid gold. And that, by the way, while showing not a lick of ability, and completely devoid of anything that would provide an objective reason for their overblown self-evaluation.

Normally, when I encounter these types, I just shrug, and move on. Life is too short to spend too much time thinking about this type of “model.”

But the one from today took it to a special level, and so I thought I’d write about her. She’s not just the type where one should shrug, and move on, but probably the type where other photographers might want a warning.

First, a little background on how I came to interact with this particular Never-Will-Be.

Every year for several years now, I’ve entered a juried exhibition called “Nudes in November” at the Sorensen. Every year, I’ve come away with an award. I’ve also won awards—as you can see if you followed that last link—for a number of other shows.

This year, I’ve been away in Wyoming for a month. I returned to find a model I’ve been working with—one who is actually quite beautiful, and usually reliable—has injured herself, and is unable to shoot this month. We were planning a piece for this year’s Nudes in November.

So I started looking around for another model. Now, although I’ve been a member and had a profile on Model Mayhem for many years now, I seldom try to find models via that venue. That path, I’ve learned, is the best way to find the Wannabes, the Never-Will-Bes, and to give yourself a headache.

Again, I want to stress this does not mean that everyone who lists themselves on Model Mayhem is a Wannabe or a Never-Will-Be. There are some damn fine models there, including Them Blue Eyes, Madame Mao, Purplekiss, and Hazel Vellichor, to name just a few.

That said, for every model like the four I just named, you normally have to wade through a boatload of “models” who would have trouble holding down a regular job at a fast-food joint for their level of unprofessionalism and undependability.

So I’ve learned to essentially “go with the flow” whenever I seek out someone on Model Mayhem with whom I haven’t worked before. Many unprofessional and undependable Wannabes and Never-Will-Bes are quite attractive. And, once in a while, even their type will be able to make it to a shoot, and a good artistic piece of work will result. So patience can be a virtue.

In other words, I no longer get upset over these gals who say they want to shoot, and then disappear when you try to get specific about a date, time, and place. If they’re interesting enough to me, I’ll maybe let them flake on me two or three times before I write them off. And, if not, I just never call on them again for another opportunity.

On September 30, I sent email to several people on Model Mayhem with whom I had never worked, but who looked like people with whom I might want to work. Most have not yet replied. (Again, that’s just par for the course. And no big deal. Some of them probably don’t check their accounts very often. I did, however, try to stick with those who showed very recent activity.)

About eight hours later, I got a reply from one:

Good! She’s reviewed my profile. I’ve written a lot there about my work, my professional achievements, my feelings about models and “models,” and it includes numerous—more than 75 as I write this—samples of my work. Also, the profile says, right at the top, under my name, that I’m in Fresno, California. (She’s from a town about 30 minutes south of Fresno.)

Two hours have passed since her message was sent, and the time I saw it.

I replied with this:

I’m free most weekends (after the current one). I just arrived back from Wyoming, and will be playing catch-up this week, but should be able to shoot next weekend if you’re available.

Nudes in November is coming up, and I need to shoot something new for that.

Note the reference to “Nudes in November.” Also, every person to whom I had sent a query listed on their profiles that they did pose nude.

And the Never-Will-Be in question responded a day later:

That sounds great. I don’t mind shooting nudes it’s art to me. I will be leaving Oct 29th for Nevada and I won’t be back until mid November but I’m sure we can work something out.

Good! No problem shooting nudes, and we’ve time to shoot before my submission for Nudes in November is due. A number of messages back and forth confirm that we’re both able to shoot the following Saturday. (That would be today: the day I’m writing this post.) After I respond with a specific time, she sends me a phone number Friday night, and says she would be able to shoot the following day (today) at 2 p.m.

Within three minutes, I respond to her with the address, directions, and a little information about the expected shoot.

Now, keep in mind that until this point, I’ve said in probably four different messages that I would like to shoot at 2 p.m. on Saturday. She has now confirmed that 2 p.m. on Saturday is good for her. All our contact (nine messages) has been via the messaging system on Model Mayhem; no messages have been exchanged any other way. Nor have either of us indicated that it would be better to change our method of communicating because Model Mayhem isn’t going to work for us.

Today, at a little after noon, I realize she still has not responded to that message. So I text to her phone number, and tell her that I sent the address, and directions, and some comments about the shoot, and ask if we’re still on for today.

Here’s the entirety of the conversation: 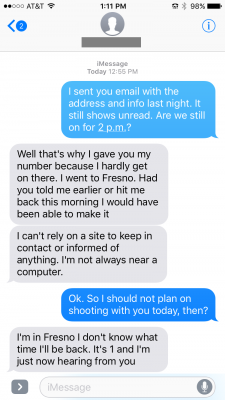 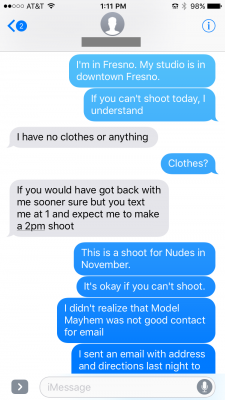 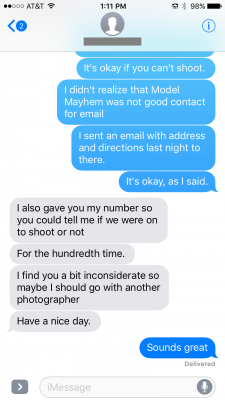 Note that, throughout, once I’ve realized that she’s saying she didn’t see the message, and that Model Mayhem isn’t a good way to contact her, I’m not upset. I keep saying that “it’s okay if you can’t shoot.” After all, the world is not going to come crashing down because our first attempt to get together went awry. I figure that if she really did not see the message, and she’s interested in shooting, we’ll just schedule another time that works for her.

But, as you can also see, that’s not all there is to the messaging. First, she’s “in Fresno,” and second, she “doesn’t have clothes.” Of course, I’m also in Fresno, since that’s where my studio is located; and we were planning a nude shoot, so clothes are irrelevant. Lastly, I’m not waiting to text her at 1 p.m. and then expecting her to make it to a 2 p.m. shoot. The last email to her that she did read gave three options, and said of those I would prefer to shoot at 2 p.m. She had responded by saying that she would not mind shooting at 2 p.m. For all practical intents and purposes, then, it seems we were in agreement to shoot at 2 p.m. The only thing left to do was to give her the address, which I did within three minutes of her last message to me.

She’s got to end it with a bit of nastiness. Despite my repeated messages that I wanted to shoot at 2 p.m., she says she gave me her number so I could let her know if “we were on to shoot or not.” And, apparently she’s also math-challenged, because she thinks that she’s told me this “[f]or the hundredth time.”

And because I’ve been so mean as to tell her that it’s okay, she decides to add:

I find you a bit inconsiderate so maybe I should go with another photographer.

Yeah. You do that, Ashley. After all, the images I would have created for you probably can’t compare to the three already in your Model Mayhem portfolio.