Yep, that’s me — the “award-winning photographer” part; not the models in any of the images!

I’ve posted about this image before. The original “tweaks” that I’d made to it in Lightroom and Photoshop…well, I couldn’t find the file. So I had to start over from the “RAW” image.

If you’re not a photographer, you might not know what “RAW” means. Basically, it’s the collection of data, in a single file, that the camera captured. You can bring that file into Lightroom, Photoshop, or a number of other programs, and then “tweak” or alter certain settings in the program(s), which will change the way the original data is presented. You can increase exposure, decrease exposure, change color tones, and way more other things than I’ve time (or energy) to talk about here.

In the end, I came up with the version you’ve seen on this blog lately, and submitted it to “Nudes in November,” as mentioned in the earlier post.

I had it printed out at 16 x 24 inches. Subsequently, I had it matted and framed at Rollf’s in Fresno (who I highly recommend for professional matting), then submitted it for Fresno ArtHop’s “Nudes in November” over at the Chris Sorensen Studio.

Last Thursday, I attended a reception where the awards were announced and prizes handed out. I won first place in photography. This included not only a sculpted metal “ribbon” handcrafted by Chris Sorensen himself, but a small cash prize (enough to pay for most of the framing, actually).

One of the fun things about the reception was standing near my image, and listening to people comment as they walked up. I swear, if I had 50 cents for every time someone said, “That’s a photograph?! It looks like a drawing!,” I’d be able to take a trip to the coast. At least.

Another high point was running into a professional photographer whose work has been displayed in numerous galleries throughout California — for all I know, he’s also displayed in other places — and who knows me. I said, “I can’t believe I won. This is the first time I’ve ever entered in any judged ‘contest.'” He responded, “Yeah, but you were doing good stuff back in the ’80s. You just didn’t know it.”

When you call to ask if I can shoot a set for you, you’ll know that you’re being shot by an award-winning photographer. 😉

Here’s a view of the image up close, hanging in the gallery, with the metal-sculpted first-place ribbon.

And here are a couple of iPhone images taken a few days before the awards were handed out, showing where the image is positioned in the gallery. We knew I had a good shot when we saw the place they’d chosen to hang the work.

This first image is what you saw as you entered the Chris Sorensen Studio. 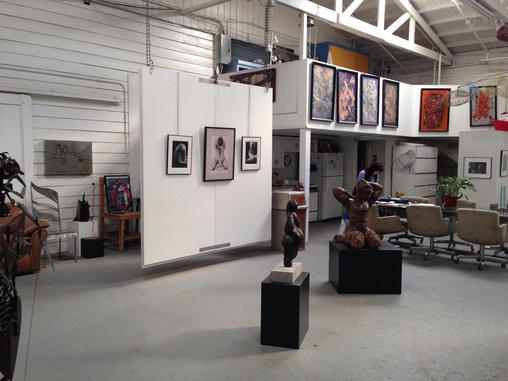 This second image shows what you saw from the back of the exhibit area for “Nudes in November.” 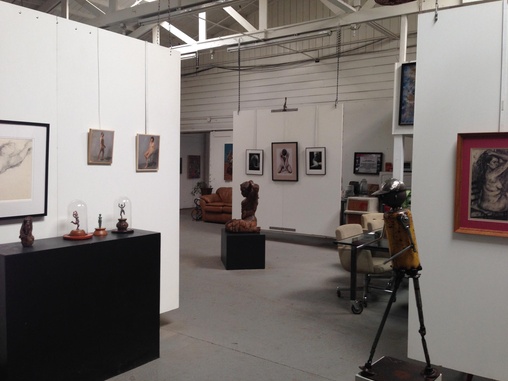 So, at any rate, I am now an “award-winning photographer.”

And I look forward to photographing more models who want to win awards, as well.

Not just any award, mind you, but first place!