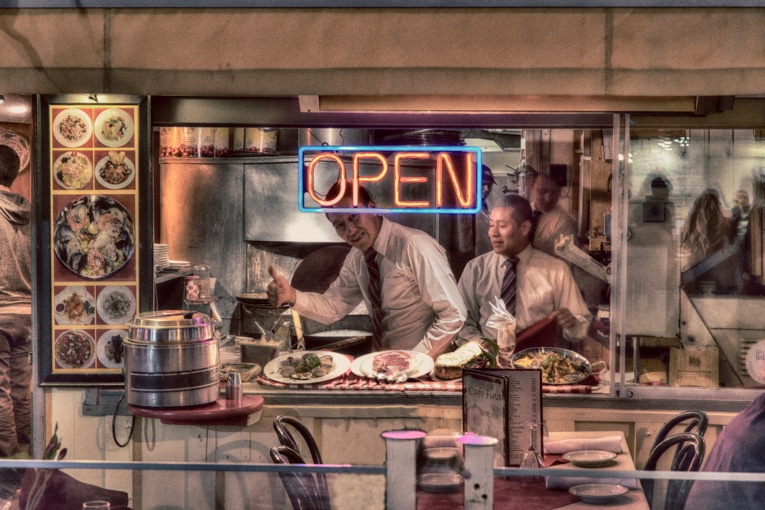 Continuing the theme from the last post, today’s post is another High Dynamic Range (HDR) image. This one is true HDR, with three bracketed exposures shot with my Canon 5D Mark III.

As I write this, I cannot exactly remember which restaurant is depicted. I was walking along a pier near the marina in Monterey — if you know the area, it’s over near the Portola Plaza.

I set up the camera with the idea in mind that I would deliberately shoot HDR, just to see what would happen.

If you read my last post, you know that I’m somewhat new to the world of high dynamic range photography. In fact, this was my first-ever attempt to shoot people. (Another HDR-of-People photo, taken a few minutes later, will be the subject of a later post.)

I waited for quite a long time, because there was a woman sitting right in front of where the guys were in the window, and I was hoping she’d leave to give me a cleaner shot. In addition, everyone inside was moving so fast, I figured it wasn’t going to work, and so I was also trying to wait for a time when they’d be stopped and involved in something.

Suddenly, one of the guys spots me, and gives me the “thumbs up” sign. I knew I had to shoot right then, because with him stopping to do that, he also blocked the guy behind him, causing them both to be still long enough to get a decent shot. Even so, I had to do some “selective de-ghosting” with Photomatix to get this image. I left the rest of the people as I found them; i.e., with the ghosting. I like the way that shows the frenetic movement in the kitchen area to the right.

And the woman in front?

I just removed her. In Photoshop, of course. Don’t go looking for her at the bottom of the bay. She’s not there.

And there you have it.

Be sure to let me know what you think in the comments section below!

2 Replies to “Open for Business”