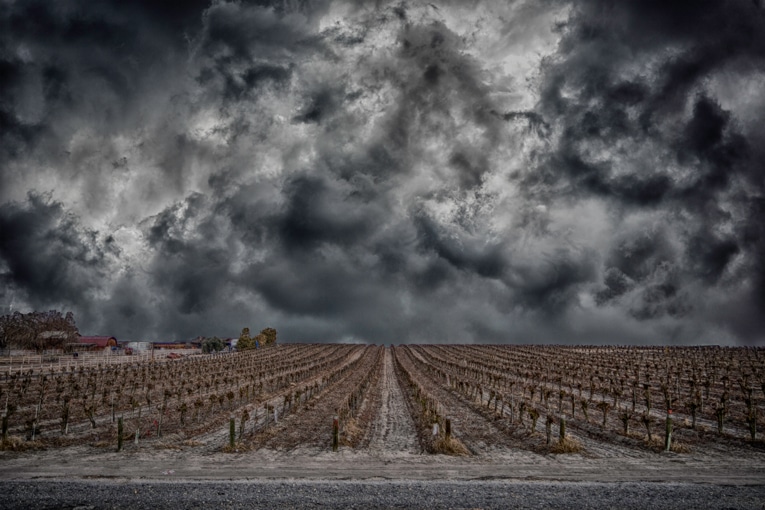 I’m always amazed at just what I’m learning these days.

I really hope that some day, I’ll be able to make a major part of my living off photography, and be able to devote even more time to improving my skills. Slowly, but surely, I’m getting there. The image this post is about is currently being sold through Rolff’s Gallery in Fresno. If you want to view the print version, it’s on display in the window of the store.

Anyway…I don’t have a lot to say about this image. It was something of an accident that proved to me that buying the Sony DSC-RX100M II was a good idea.

Not that the image was purely the result of the Sony…

I say it was “something of an accident” in that I didn’t plan it; I wasn’t out deliberately shooting that day, but stumbled upon the vineyard, and would not have been able to capture it, except that I had bought the Sony to carry with me most everywhere I go now.

The upper half of the image was shot with my Canon 5D Mark III. I was meeting another photographer-friend at a local Starbucks during a week where we seemed to be having a lot of storms. As I was leaving, the sky was looking particularly interesting. So I pulled out my camera, and just stood right there by my car door — I think I even still had one foot in the car — and collected a couple dozen images of various cloud formations.

The bottom half of the image was shot with the Sony DSC-RX100M II that I recently purchased to carry with me wherever I go. I was on my way through some backroads to visit some clients one day in another town. Along the way, I noticed a full moon over the vineyard. I knew that the Sony had an “auto-HDR” setting, and I wanted to see what it would produce. In order to frame things the way I wanted, I had to hold the camera as high above my head as I could reach, while standing on a mound of dirt. I didn’t have high hopes that I’d get a good result that way, as HDR requires (at least) three images fired at different exposures; you really should use a tripod to avoid movement.

To my surprise, the vineyard (as you can see) came out quite crisp. The moon, however, did not. The rest of the sky came out generally a boring pale blue.

I think my version of the sky is an improvement.

I thought about calling this image, “The Grapes of Wrath,” but I was concerned that might create a copyright issue; hence, “Stormy Vineyard.”

But maybe I shouldn’t be giving away the secrets to my images, I’ve been told.

What do you think? Let me know in the comments.

2 Replies to “The Calm Beneath the Storm”