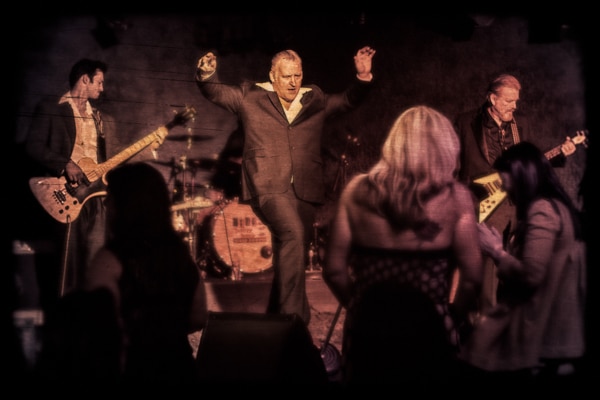 I was just telling Bunny Chafowitz (Denise Chaffee) about a TV show idea I had.

You take four skilled photographers. They don’t have to be pros. Some might be advanced hobbyists using Nikons who shoot for small parties, or make ad hoc appearances shooting bands in local venues. Others might work for a chain, taking kids pictures. But most would be professional photographers with fully-equipped Canon systems working either as assistants, or with studios of their own.

Bring them on TV, and give them a packet of photos, textures, what-have-you, and they have access to additional images in the studio library. For the truly bold, there is a small studio off to the side, behind the ice cream machine.

The show is divided into three parts.

In the first part, they have 20 minutes to take the ingredients of their packets and create a small image for the Internet. They can use any style they want, but they must use all the ingredients from their package. If they somehow don’t use everything from their packet, it’s not necessarily the end of the world, but it does not bode well for them. Whatever was presented would have to be truly impressive.

Some of the basket ingredients might require color correction, or tonal and contrast adjustments.

And they have to use Photoshop. Blending modes and such would be okay, but no additional third-party plug-ins.

For the second part, they have to create a 16 by 20 inch giclée on canvas. They get 45-60  minutes. (Obviously, the show will not be that long! But, then, you know….) Again with the packet. This time they can use either Photoshop or Corel Painter. Maybe a little onOne, or Topaz Labs, or one of the Google Nik Software products.

Some items in the packet might be damaged, by the way. Maybe sometimes for kicks, something like “gummy eggs over easy,” or “shad roe sack,” or “durian” will be included in the basket. Naturally, all the work stations have flat-bed scanners — with both black and white boxes to be used when scanning three-dimensional objects.

Although the focus — hehe — is on the images, extra points might be given for presentation. Matte boards and a small selection of frames would be available.

And, finally, for the third part, they will have to put together a small photo book in Lightroom. Nothing fancy. But it must be something, obviously, that would help them defeat their final challenger.

For my own submission in the second round, I present the image at the top of this post. The band is one of the first I ever was privileged to shoot: the Mofo Party Band. Turns out, coincidentally, that the lead’s wife works with Bunny Chafowitz, but we didn’t know that until I was already at the shoot.  The image was shot with my trusty Canon 5D Mark III, using a Canon EF50mm f/1.2L USM set at 1/80th of a second and f/1.8, ISO 4000. No flash — I prefer no flash when shooting bands, so as not to be disruptive to them or their audience. Post-processing included the use of Lightroom 5, Photoshop CS6, a couple of Topaz Labs plugins, along with some onOne tweaks to add the scratched-film effects.

Oh, about that show? Did I forget to mention that their works would be judged by a panel of photographers after each round, and each time, one photographer would be “cropped”?