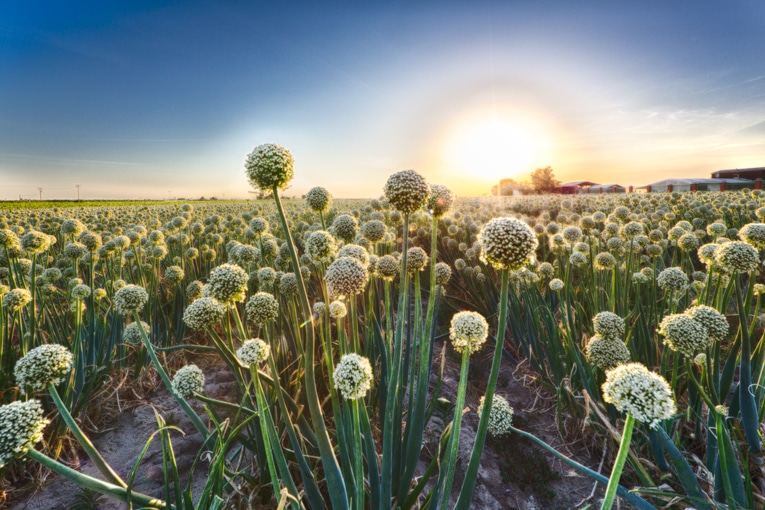 For some farmers, that’s just what onions are.

Frankly, I don’t know a lot about onions. I like to eat ’em. That’s about it. Recently, I decided to start trying to shoot “agscapes,” as Ryan from Horn Photo called them when I showed him my work the other day. I was surprised to learn that he’s been shooting “agscapes” for a couple or so years now.

I was also surprised to see that onions, when blooming, look like giant dandelions.

My idea is to try to apply some of the techniques of more-traditional (and perhaps not-so-traditional) landscape photography — in the not-so-traditional vein, I’m doing some HDR, like the featured image in this post above — to photographing area farms. If I can get access to some decent views, I’d like to also incorporate some farm equipment, especially the really old stuff that someone has left rusting somewhere because they don’t know what else to do with it. I’ve seen some cool old plows and tractors, but not in areas where I could get a decent photo of them.

My hope is that, given the area in which I live is sort of considered one of the major farming areas of the world, I can both enjoy melding farming with artistic photography, and possibly convince people to buy the results, and hang them in their homes, their offices, and maybe convince a hotel or other businesses to feature my work.

Today’s featured image was shot deliberately attempting to use some unique approaches. First of all, as you can no doubt spot immediately, I shot almost straight into the sun. Second, I used a 5-degree spot meter attachment on my Sekonic L-478DR Litemaster Pro to meter various areas. (I have a Sekonic L-758DR DigitalMaster, which has a 1-degree spot meter built in, on order. It should arrive next week. I buy most of my equipment locally from Horn Photo, with an occasional high-end purchase from BHPhoto in New York, and the very, very, very rare purchase of photo-oriented items from Amazon. Amazon can beat any of them at shipping. But I appreciate my local company best because I know I’m supporting a select group of local pros — especially when it comes to customer service.)

When you’re shooting on a Canon 5D Mark III, RAW, that eats up a lot of unnecessary recording media. There have actually been times where the only reason it stopped was because I ran out of media to record the images.

But I digress a bit. The point is that because of this, and an article I read about using the Zone System with digital media, I have taken to metering various areas of the image, then performing the calculations to obtain the tonal range I’m looking for and shooting each image manually. One of the benefits of the CamRanger system is that you can rather quickly change the shutter speed, then fire off another exposure. Not as fast as programming a standard bracket pattern into the 5D Mark III itself, but I think it’s fast enough for what I’m doing.

Plus, it makes me think. And isn’t that part of what we should be doing when we’re “making” an image? Isn’t that what Ansel Adams and others like him intended to promote with the Zone System? We think about our images. We try, in a sense, to skip ahead in our minds to the final print — that’s pre-visualization.

The lens was a new Canon EF 14mm f/2.8L II USM Ultra-Wide Angle lens I purchased just about a month or so ago. I already told you about the camera.

The images were combined using Photomatix Pro 5. The resulting TIFF file was then imported into Photoshop CS6. I first fixed the lens distortion using the “Lens Correction” filter in CS6. I then made some minor fixes to the sky, cleaning out sensor spots and other things I didn’t like. A lens flare shot through the image from — surprise! — the sun to the bottom left of the image, intermittently breaking through the image, and I removed most of the flare. Finally, a little dodging and burning using one of my favorite dodge-and-burn tricks, a 50% gray-filled layer set to Soft Light as a layer mode. And, lastly, a run through Nik Software’s Sharpener Pro 3 for output sharpening before I printed it.

The resulting approximately 17 by 22 print looks far better than the poor image I can show you on the Internet.

One major flaw — as far as landscape photography is concerned — is that the image is not sharp throughout. This is due to the fact that the wind was blowing pretty good while I was there, and because I shot multiple images which I later combined in Photomatix, even with de-ghosting there’s just a lot of movement. If I can get back to that field on a non-windy day, before they stop blooming, I’m going to make another try at this. An alternative way around it would be to take the single image that was (more-or-less) correctly exposed (I deliberately underexposed it a tad because of the sky; the tonal range between shadows and sunlight is just magnificently huge here), and tweak it a few times before combining it with itself.

Look forward to more such images from me in the future.