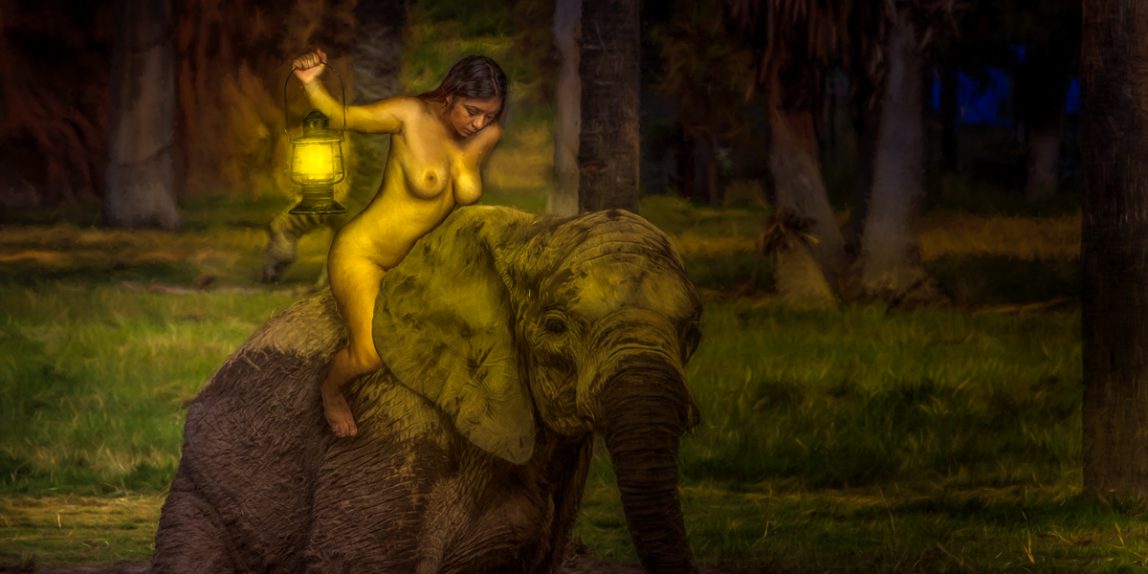 This year’s Nudes in November, a part of the ArtHop™ experience at the Sorensen Studio in Fresno, California, was my third time participating in that juried exhibition. In fact, the 2013 Nudes in November was the first time I had entered a juried competition.

It therefore also constitutes my third Nudes in November win, and my eighth win across all juried competitions. (The only time I’ve ever entered a juried exhibition where I did not win anything at all was in Chris Sorensen’s birthday show a couple months ago, where (so far as I know) there were no awards other than “Best of Show,” which went, as expected, to a sculptor.)

This year’s piece was called “Stuck.” The idea for it came to me kind of “last minute.” In fact, it almost wasn’t even submitted by me for the show. When I first created it, I wasn’t that sure it was worth submitting. After showing it to several people, though, I was encouraged by the response, and got it framed up just in time to submit.

The model was shot in my studio, on a saddle, holding the (unlit) lantern. The elefink was photographed at the Zoo. I combined the images in Photoshop, converted the scene from daylight to night, and “lit” the lantern all using Photoshop techniques.

There were two other pieces that I submitted, as well.

The first was a playful piece – which I actually thought might stand a chance of winning – called “Artistic Nude.”

The idea for this image came about because my friend, and fellow-artist, Marcos Dorado Calderón, was drawing our friend Michelle Dinsdale. He was drawing her in studio, nude, and setting her against the backdrop of the Fulton Mall. I decided to play off that idea, and brought Marcos, Michelle, and his easel with the incomplete image on it, to my studio. (Ironically, my studio used to be Marcos’s studio. He briefly moved to New York, which gave me just enough time to grab his studio out from under him. When he unexpectedly returned, he took a studio down the hall from me. We are good friends. More about Marcos another day.)

After shooting them in the studio, I asked Marcos to show me the area of the Fulton Mall he was using for the backdrop.

The curators at Sorensen Studio hung our pieces side-by-side for the Nudes in November show.

The last piece I submitted had less manipulation going on. I deliberately shot the piece to emulate a Renaissance look. It was also very – very – loosely based on the memory of an old image called “The Rape of the Sabine Women.”

I titled that piece, “The Struggle.”

I just love the expressions on their faces here. Both models did a fantastic job of helping bring my vision for this image to life.

These images are all the result of special attempts to either emulate an older style, or do something unique that is a little off the beaten path from the normal boudoir-style shots. You don’t have to be a super-model for us to pull off something like this. All of these people are normal folk.

So if you’re interested in being part of an artistic nude project, “just because,” or perhaps as a surprise for your significant other. Contact me. I can help!