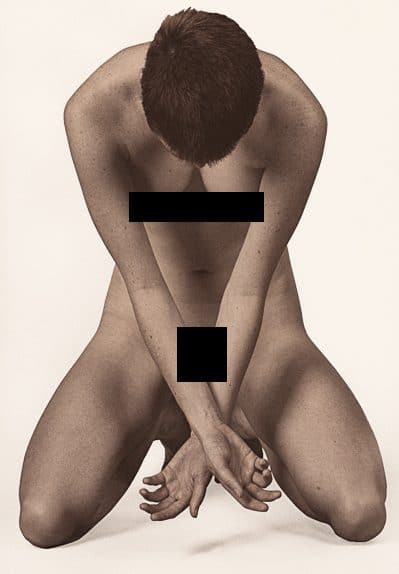 Every year in November, the Sorensen Studio in downtown Fresno hosts “Nudes in November.” It’s been going on for at least — I’m told — eleven years, but I’ve never participated. For that matter, I don’t think I’ve participated in any shows or competitions in more than 25 years.

One of my friends changed that this year. He encouraged me to submit a couple of my pieces. At least one, you’ve already seen. The other, though, I don’t believe I’ve posted here until now.

This image was originally shot by me some years ago, when I hired a model from San Francisco by the name of Iona. (I suspect that is not her real name; I think it’s a name she uses for modeling purposes only.) At that time, I had access to a full-sized studio, and brought her in for a few hours of shooting. Of the approximately three- or four-hundred images we shot, most were done with future photo manipulation, and compositing, in mind.

This image, however, was actually meant to be an interpretation of a stance taken by Gorean kajirae — at least in the presence of free persons. Some years ago, I had read the books by John Norman about Earth’s parallel planet, Gor. Kajirae — the form “kajiras” is incorrect — are essentially slaves. Kajirae are female, and are referred to in the singular form as “kajira” when referring to one female; the masculine form, more rare, is “kajirus” for the singular and “kajiri” for the plural.

If I recall correctly — the Wikipedia links will give you more information if you’re interested — there were approximately 27 or 28 books in the series. I think I read at least half of them. I later learned that there are people in the world who actually try to live in accordance with the books(!) and that, in an online social environment known as “Second Life,” there are virtual spaces that have been modeled on the books, as well. People there engage in role-playing as various characters from the stories. I myself occasionally, and briefly, spent some time hanging out in such places, and about once every year or two I return just to see what’s happened.

In any event, the image accompanying this post was my interpretation of a kajira in her customary submissive pose. I lost my original Photoshop file, with my original interpretation of this image, so I had to again manipulate the color and tonal ranges in Lightroom 5 and then Photoshop CS6, using a plugin or two that I can’t remember. It didn’t match up with the original version, but I actually like this better.

The photograph itself was shot with a Minolta Maxxum 5D digital camera, ISO was set at 100, shutter speed was 1/160th of a second, aperture was f/14, and the focal length set for the lens — which, as I recall, was a zoom — was 60 mm. According to the meta data “flash did not fire,” but that’s not true, as you can probably tell. The flash units were Alien Bees; I don’t recall the exact models. They were set in very large soft boxes, one of which was an octagon that I think was about 5′ or 6′ in diameter. The model was shot on white background paper, pulled all the way forward to almost where I was standing when I shot the image.

So, keep your fingers crossed for me, as I make my first foray into showing my work in a studio, where it will be judged. And if you like Arthop, consider visiting Nudes in November at the Sorensen Studio on November 7, 2013, where you can see this, and my other piece, hanging. I printed both my pieces at 14 by 21 inches, and both are framed and matted, which probably adds another 8 inches or so. You can even purchase them, if you are so inclined.

Oh! I should note that if you want to see the uncensored image, you can find it here.

2 Replies to “Nudes in November”