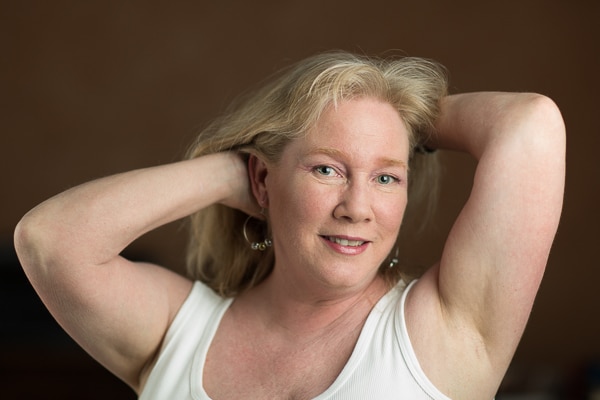 Bunny Chafowitz (my wife, whose real name is Denise Chaffee), said I could post this one if I want. (She’s pretty much against my using her as a guinea pig.)

I was experimenting with putting 580 EX II flash units inside the 32″ by 42″ softboxes. One is just to my right, raised up above her, and aimed slightly down; the other is to her right, about even with her body.

According to my Sekonic Litemaster Pro L-478DR, the right light put out enough light for f/2.8, while the left was about f/1.8. There’s not as much contrast as I expected, given the meter readings.

I also had manually zoomed both of the flash units to 24mm to get a broader light to hit the fabric in those large boxes.

I don’t really know much about working with flash, because I use flash so little. I pretty much always shoot natural light, and lately I’m used to shooting inside clubs with very low light.

I’ve done flash in the past, using a set-up like this one today, with some good shots coming out, but usually after a lot of dinking around and setting them on full manual. This time, I think they were set to ETTL, but, frankly, I’m still figuring out exactly what that means, and how to use the 580s. Particularly since I had also set power levels using the Sekonic — does that override anything the camera might do? I don’t know yet.