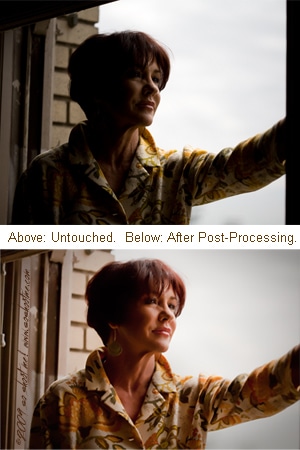 Once in awhile, I get a wild hair and want to test what I’m able to do. Erin’s impromptu portrait is an example.

I knew there was no way to get good balanced lighting in this image. Erin likes to sit on the windowsill of my sixth floor office and watch the sun going down while we chat about the day’s happenings.  The sun coming in that window is just too strong and the flourescent lighting in my office is unable to balance it out.

A flash — such as the 580 EX II, not yet purchased at the time— or perhaps even a reflector inside combined with a diffuser held in her hand outside could have balanced things out so I could, as one of my photographer friends likes to put it, “get it right in the camera.”  But I had a feeling that if I shot it just right I could get it into Photoshop and do something nice with it there.

First stop, however, was Adobe Lightroom 2, where I did as much tweaking as the program would allow before sending it over to Photoshop CS4 for some additional work and finishing touches.

I think you’ll agree it worked out quite nicely.  But, then, it’s hard to screw things up when you have one of the world’s more beautiful women perched upon your windowsill.

One Reply to “Erin Before & After”