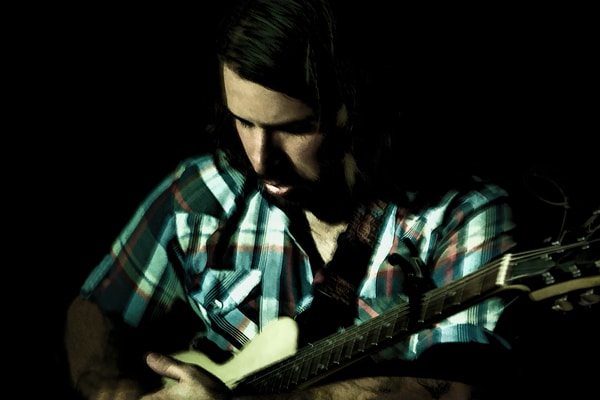 Awhile back, I was given the opportunity to shoot The Mofo Party Band at Audie’s Olympic.

When I arrived, the opening act — which I had not known about — was just finishing up. I really liked their look, so I rushed to try to get my camera set-up and take into account the lighting to see if I could get a shot or two before they closed.

Unfortunately, I was too slow in getting the camera out of the bag, turned on, and settings the way I wanted. I was only able to snap about one or two images — at incorrect settings because I could see they were getting ready to literally set down instruments. I did not have time to boost my ISO enough to get a good exposure, and my camera was still set on Aperture-Priority mode, which I frequently shoot when I’m doing portrait work. (For band shooting, I usually go full-manual these days, but I had not learned that lesson yet, and probably wouldn’t have gotten a good shot at all if I’d been in that mode.)

At the moment, I forget the exact settings for this image — and I’m not near my archival disk (again!) as I post this — but I seem to recall it was actually somewhere around 1/15th of a second or so, probably wide-open on my 85 mm f/1.2 lens.

Due to the inevitable blur, I decided I had no choice but to play around with this in post-processing to see if I could make something I liked. I’m not completely happy with this, but I’m happy enough. I like the dramatic look of the light and dark, along with the somewhat transformed colors. Post-processing was done with Photoshop CS6 and several tweaked Topaz Labs filters.

Smooth Hound Smith did ask me to shoot a couple posed shots of the two of them, near a door at the back of the bar, which I did.

And they’ve promised to give me a call the next time they’re headed this way, so I can attend and shoot them in action.