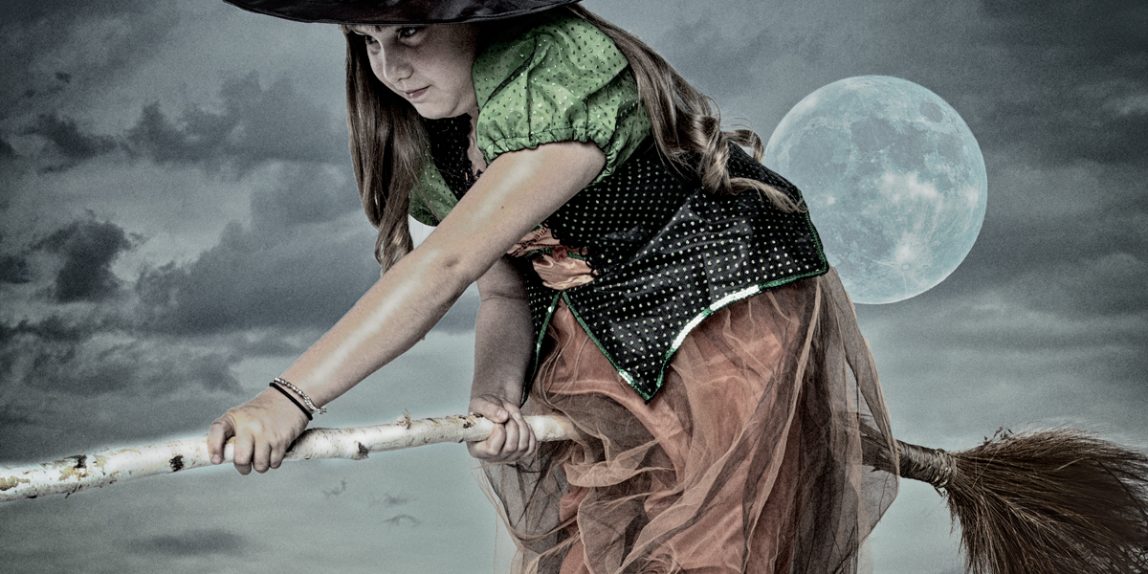 Yesterday being Halloween, my office manager’s daughter flew by with her “Good Witch” costume. I knew she was coming, of course, so the studio was well-prepared.

We began with a few shots of her at a vanity that I normally use for boudoir shots, and partly because the vanity was then positioned in such a way that parts of the studio showed up in the background, I decided to do a little background replacement in Photoshop. I already knew we were going to do a “flying witch” shot — I’d actually made a broom from parts I’d collected at the local Michael’s craft store — so it was no stretch of the imagination to decide to do a little compositing on some of the rest of the shots.

For the background, I first cut out the existing background using a Layer Mask. Next, I dropped in a portion of a stock interior shot I found elsewhere. Normally, I prefer to use my own stock of photos for such things, but for some reason I don’t have very many spooky castle interiors. When I find myself lacking the right image — as long as it’s going to be for a small portion of my composition — I look to any number of stock photography websites for help. (It seems to me there are a bazillion stock photo websites available these days. Google is your friend, if you need help finding one.)

The one thing I don’t much like about using stock shots, aside from the time spent hunting them down, is that for reasons I don’t quite understand, I seem to have more trouble blending them with my own shots. Maybe it’s just psychological, since I don’t really like using photos shot by other people in my own work, even if they are available as stock.

When using something as a background, I like to give it a little bit of a Gaussian blur. If my own composition is fairly sharp throughout, this also can make my shot harder to blend. In the image of the Good Witch looking into the mirror, deep in thought, while holding the skull, I gave a little blur to my own image, as well. I then masked off the blur from some areas, particularly the witch’s face.

Next up comes the need to make the components appear to all have been shot at the same time. Lately, I’ve been finding that Color Efex Pro (a Nik Collection tool) helps me both to set the mood, but more importantly to add “film effects.” The film effects — particularly adding grain throughout the image — helps pull everything together. Sometimes I’ll find that I need to run an individual layer (such as the background) through a few tweaks, including Color Efex Pro, to alter colors, saturation, etc., before “stamping” the entire image and running it through the film effects.

Suffice it to say that I’m never satisfied with the “out of the can,” or automatic settings in the film effects, and I end up tweaking individual elements, such as grain, brightness, saturation, contrast, etc., until it suits my tastes.

For the featured image at the top of the post, I had, as I said assembled the broom using components I bought at Michael’s. The stick was some kind of tree branch, while the broom portion was composed of two different materials; one was more woody, while the other was like a fine grass of sorts. I mixed them together, and bound them to the tree branch with about 50 feet of some kind of binding material that was supposed to replicated “sinew.” (Very sticky stuff, that!)

I shot her against a white background, not taking particular care with lighting the background itself, since I knew I was not going to keep that in the final shot.

That image was shot using two 10 inch by 36 inch soft-box strips placed on either side, and slightly behind her. A large 5-foot octabox was placed so that it lit the image slightly from the left of center. I myself was crouching beneath the right edge of the octabox when I took the shot with my Canon 5D Mark III, and an EF 24-70mm f/2.8L USM lens at 35mm, f/6.3, 1/125th of a second, and ISO 100.

It was then composited with from my own stock shots of (1) clouds, and (2) the moon. A little desaturation was added to bring all colors more closely into line. The layers were “stamped” into one image, which was then run through Color Efex Pro, using a combination of filters in addition to the film effects, to achieve more of a night-time look, and an even distribution of grain.

Interestingly, whereas the Witch at the vanity took me around 40 minutes of tweaking, and I am still not really satisfied with it, the flying witch shot took only about 10 minutes of editing.