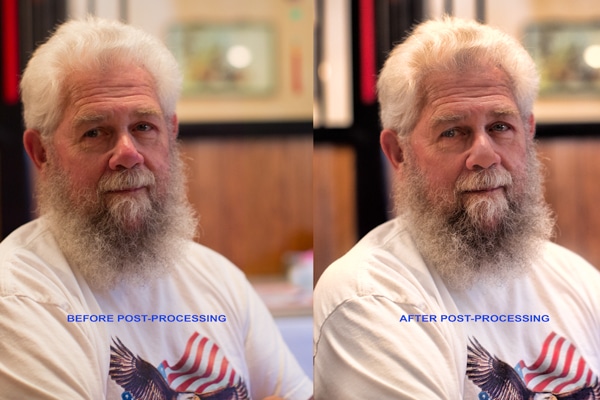 When I was in high school, I was fortunate to be able to take photography at a school that had a good-sized darkroom, with areas for processing color as well as black-and-white film and prints. To this day, I still remember the acrid smell and the way everything inside the room was — when not completely blacked-out for film or color-print processing — red-tinged. It was the perfect place for the then-shy version of me to hang out.

Back then, I worked almost exclusively in black-and-white — I don’t think I ever processed more than the few required color prints while I was learning that process — and spent most of my time with a fellow-photographer named “Donna,” learning, burning, and turning less-interesting photos into more-interesting photos.

In more recent years, everything went digital and, frankly, I haven’t minded that a bit. The level of control far surpasses what I could do back then. It costs much less to “develop” images, both in terms of time and money. And the smell of chemicals doesn’t cling to me even after I’ve left the darkroom.

That isn’t to say that digital photography has made darkrooms unnecessary, or obsolete.

It’s just that my darkroom today is comprised primarily of Lightroom 5 and Photoshop CS6, with an occasional dose of various plugins, tweaked until I get an image that satisfies my artistic vision. Instead of juggling various techniques with the enlarger — juggling because I had to factor in a number of other things, such as the temperature, type, strength, and duration in the chemicals, and if someone else was working with me, to coordinate moves with them — I work with a computer. And I have the added benefit that if I screw up, or simply don’t like the result of, a particular step in the process, I can undo it!

Not that the digital darkroom gives exactly the same result as old-fashioned darkrooms, but, then, that’s not really the fault of the darkroom. As master darkroom printer Pablo Inirio has said:

Digital prints have their own kind of look, and it’s fine, but fiber prints have such richness and depth.

Nor is the subjective experience quite the same. Sarah J. Coleman, author of the previously-linked article notes:

Over the last fifteen years, almost every photographer I’ve interviewed has waxed poetic about that “magical” experience of seeing an image develop in chemicals for the first time. You have to wonder whether today’s young photographers will rhapsodize as much about the first time they color-calibrated their monitors.

Newer photographers I’ve met, who didn’t start snapping images until after darkrooms had largely been replaced by dodos, frequently look down their nose when I talk about “processing” my images. Having never seen the inside of a darkroom, nor been properly taught, and not really understanding that photography is as much “art” as what the “tech” can do, they think adjusting a few knobs and pushing a button on a camera to produce a good image makes them superior to anyone who uses post-processing.

“I like to get it right in the camera,” they say. And it’s amazing how often the noobs say it with a sneer, as if post-processing demonstrates an inability to properly use a camera.

The best photographers — the best professional photographers — have always known better. Just about any image can be improved during post-processing. And Ansel Adams didn’t become more famous than the guy standing next to him taking “the same” picture because he was better at “getting it right in the camera.”

Ansel Adams is well known for spending a whole day in the darkroom, just to produce one print.

As the article from which that last quote comes also says,

The lesson here is that processing is just as important as the photo taking process, and shouldn’t be looked down upon as a lesser art form.

I would go a step farther, and say that “anyone can take a picture, but not everyone can learn how to use the modern digital darkroom to improve their pictures.” To turn out your best, you really need to know how to shoot, and how to process, your images.

The photo at the top of this post was taken of my father, at a restaurant, using just the available light. Post-processing allowed me to bring out his eyes, among others things — to compensate for the lack of control over the environment. As Adams said,

Dodging and burning are steps to take care of mistakes God made in establishing tonal relationships.

Similarly, I think you’ll agree that the judicious use of dodging and burning in my modern “digital” darkroom allowed me to take care of the mistakes the environment caused to tonal relationships in this photo of my father, making even the mundane “candid” more interesting.