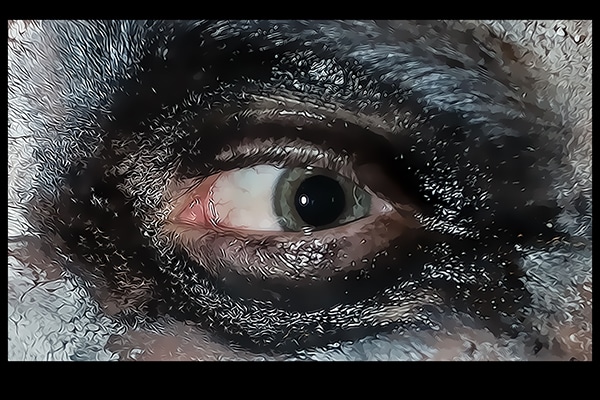 Sometimes, a photographer just has to play around a little.

This particular image is actually a cropped portion of an image I shot this past Halloween. One of my friends — I won’t name him unless he wants to come here and name himself in the comments — came dressed as Joker (the Heath Ledger version). I got several good images of him.

For this one, I imported it into a filter from Topaz Labs. I think it was Simplify 3, but I don’t really remember now. After running the effect, and returning the image to Photoshop CS6, I was disturbed to notice that the effect as it appeared in the plug-in did not translate to Photoshop, unless I greatly zoomed the image.  Nothing I could think to try managed to make the effect visible.

Finally, in desperation, I simply zoomed the image until just the eye was on-screen. Then I did a screen capture. (This, by the way, is the reason for the extra black border around the image. I couldn’t get exactly a 600:400 pixel ratio in the capture, which is the size I need for these posts.)

Sadly, I still haven’t figured out how to achieve this effect in a way that would allow me to make a full-size print. I’d love to have it framed, in my office, or an art show.

Because of the post-processing (and the fact that I’m not near my archival drive as I write this), I cannot give you the photographic specs. I don’t think it matters, anyway, due to the level of post-processing.

As I said, sometimes a photographer just has to play around a little.