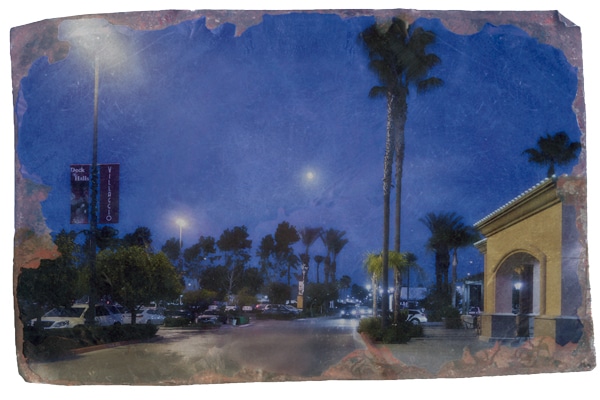 Well, actually, there’s no such thing as old River Park in Fresno. There’s just River Park. I called it “Old” River Park because of the treatment I gave to the image — about which I’ll say more below.

Last night, I was “stuck” over there waiting for an image to be printed by Horn Photo (one of the best photography stores I’ve ever had the privilege of frequenting, and where I buy almost all my equipment these days). So I ambled on over to the Barnes & Noble store to check out some photography books while I waited. (Yes, I did buy some.)

On the way back over to Horn Photo, I decided to play around a bit with my Sony DSC-RX100M2. Such a sexily-named camera. I’m liking it a lot better now that I got the electronic viewfinder. (Too bad the damn viewfinder costs just a little more than half the price I paid for the camera!)

Maybe I should take a minute to say why I like the viewfinder so much. For one thing, it tilts. Yep, as in you can look at it like you would through a regular viewfinder, or you can tilt it to various angles, including one where you’d look straight down into it, sort of like the old Rolleiflex.

Here, why don’t I just show you?

It moves from one position to another smoothly — so you can actually also use it at any point in between.

The other thing I like about the viewfinder is that it has a diopter adjustment button. So if you’re like me, and you need reading glasses to see up close, you can adjust the viewfinder to fit your eyes.

And, finally, it somehow “knows” when you’re looking through it. While it’s up to your face, the LCD screen on the back of the camera goes black, and the image and metadata appear in the viewfinder; when you remove the camera from your eye, the LCD screen comes back on again.

So the image above was shot while walking across the lot between Horn Photo and Barnes & Noble. The image — as is my norm — was shot RAW. I adjusted white balance, vibrance, and a couple of color sliders in Lightroom 5 before taking the image into Photoshop CS6 for some tweaks in my onOne plugin to get the old dirty tintype look. And again as is my norm, I tweaked the preset, and then dialed it back a little by reducing the opacity of that layer.

Oh, yeah. I almost forgot: I did do some perspective correction in Photoshop, as well. This included using not just the Perspective Transform tool, but also doing a little Puppet Warp on the tallest palm trees.

The metadata details on the image include that it was shot handheld at 1/50th of a second at f/1.8, ISO 800, without flash, and at a focal length 10.4. (I still have no idea exactly what this means, since the lens is a 28-100mm f/1.8-f/4.9. I suppose I could read the manual, but it hasn’t been important. I think this probably relates to a “virtual” setting in the camera.)

As I said, the addition of the electronic viewfinder was an outrageous expense, given the cost of the camera. But, as I also said, I’m enjoying the camera more now, which means I’m using it more.

And, in the end, that’s why I bought it. Without it, this camera would not be as much fun for me.