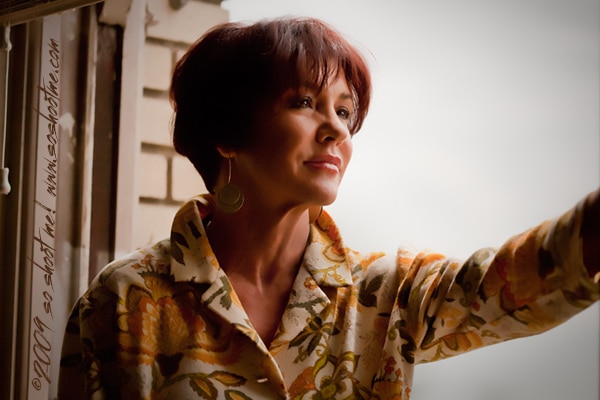 First, apologies to the IE folks who haven’t been able to view the site.  As noted elsewhere, I had to make significant code changes to the original theme.  In the process, I left a “- ->” off the end of one line, which apparently confounded Internet Explorer.  I’ve used Firefox for so long that I forget some people still live in the Dark Ages of IE and hadn’t viewed it using that browser.  So, a belated welcome to the serfs amongst us!

As a follow up to yesterday’s post, I thought some folks might like a better look at the finished version of Erin’s image.  In the larger image here, you can see that my post-processing in Photoshop included a little “digital painting” of portions of the image.  Some of this was achieved using a Kodak Plug-In that is meant to airbrush the skin tones.  However, unless you create two layers and mask one of them, the effect isn’t limited to skin; it impacts the entire image.  Personally, I like the effect — and, besides, sometimes masking just takes longer than I want to spend on an image.

In addition to the Kodak Digital Gem Airbrush Pro plug-in, I used the cloning, dodging and burning tools within Photoshop to tweak shadows and for some cosmetic retouching to enhance the “digital painting” look of the image.

What I really aspire to is the type of work done by digital artist MichaelO.

Hey, everyone has to have some unreachable pipe-dream of a goal in life to keep them pushing forward, nu?