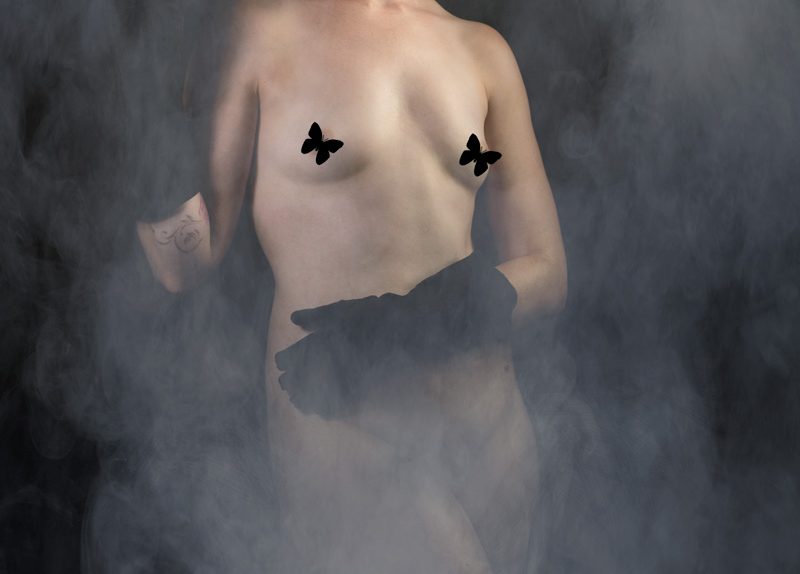 For years, I have had a Facebook presence, without any real problems.

I have no idea if this is the result of policy changes, or if my increasing popularity has caused people to start reporting me to Facebook either to slow me down, or because they’re genuinely offended that they came to look at a Facebook Page they were not forced to look at, saw something they didn’t like, and reported it with the hope that Facebook would remove it despite compliance with the Community Standards.

At any rate, as I write this, I’m at the start of a 72-hour banishment from Facebook because of the featured image. And, yes, this is exactly the featured image that got me banned. Complete with the black butterfly stamps that were blocking the nipples, and the smoke that prevents anyone from seeing the pubic area.

Yet somehow, according to the Whatever Behind the Curtain, it is in violation of the Facebook policy on nudity.

For clarification, here are the Facebook Community Guidelines on Nudity, as of this writing:

People sometimes share content containing nudity for reasons like awareness campaigns or artistic projects. We restrict the display of nudity because some audiences within our global community may be sensitive to this type of content – particularly because of their cultural background or age. In order to treat people fairly and respond to reports quickly, it is essential that we have policies in place that our global teams can apply uniformly and easily when reviewing content. As a result, our policies can sometimes be more blunt than we would like and restrict content shared for legitimate purposes. We are always working to get better at evaluating this content and enforcing our standards.

We remove photographs of people displaying genitals or focusing in on fully exposed buttocks. We also restrict some images of female breasts if they include the nipple, but we always allow photos of women actively engaged in breastfeeding or showing breasts with post-mastectomy scarring. We also allow photographs of paintings, sculptures, and other art that depicts nude figures. Restrictions on the display of both nudity and sexual activity also apply to digitally created content unless the content is posted for educational, humorous, or satirical purposes. Explicit images of sexual intercourse are prohibited. Descriptions of sexual acts that go into vivid detail may also be removed.

Well, the image I posted of Chlo? does “include the nipple.” Two of them, in fact. Of course, those nipples are hidden underneath black butterfly profiles that I stamped over them in Photoshop in an attempt to comply with the Facebook rules as I understood them.

But those nipples are there. You just have to keep in mind that women are born with nipples, and you’ll realize that even though you can’t see them, they’re there.

Which is why I said that every image of a female ever posted to Facebook that includes the torso area is in violation of the rule on this reading, as well. Wearing a shirt? A blouse? A full dress?

Doesn’t matter: barring some surgical, or very odd genetic issue, we all know there are nipples – gasp! nipples! – under there.

Surely that can’t be right, you’re saying to yourself. Facebook would not ban the image just because everyone knows that women have nipples, even if you cover up those nipples.

It must be some other “genitals.”

Do you see any other genitals in this image?

…how the heck can you tell? She’s obscured by smoke!

During this same period of time, of course, Facebook has had no problem with charging my account for advertising.

Hey, maybe that’s it! It’s part of Facebook’s anti-smoking campaign! Maybe it wasn’t the nudity, after all, but the fact that there is so much smoke appearing to emanate from the cigar!

Nope. Facebook actually told me that it was because of a post containing nudity. (I would post the message they sent me here, but it seems to have disappeared. It was on my screen when I tried to get into my account this morning, after I had been forcibly logged out by Facebook. It didn’t occur to me to save a screen shot.)

That’s also why I’m pretty sure that I didn’t run afoul of the describing-sex-in-too-much-detail rule. I would say it’s because I didn’t describe sex (at all), but then, I didn’t post nudity, either.

And the supreme irony? Remember this part of the Facebook Community Guidelines on Nudity?

We also allow photographs of paintings, sculptures, and other art that depicts nude figures.

So, photographs of paintings, sculpture, and other art that depicts nude figures would be okay, but you can’t post a JPG created from the original, I guess. According to this rule, if I had simply taken a photograph of the print – which surely counts as “other art” – then I would have been completely in compliance with the Community Standards.

Attempts to contact Facebook to ask about this are pointless: there is no procedure for doing that. I know, I’ve been trying off and on all day.

Meanwhile, I’ve decided that I’ll no longer advertise anything on Facebook, so they’ve lost the money over the idea that a woman might have nipples (or other genitals) that you can’t see hidden away somewhere in the picture, and I will be looking for alternative social media sites to devote my energies towards in promoting my business.

Just take care that the featured image doesn’t show up anywhere in the post. You wouldn’t want Facebook to think you were trying to sneak in any non-visible nipples, or other genitals.