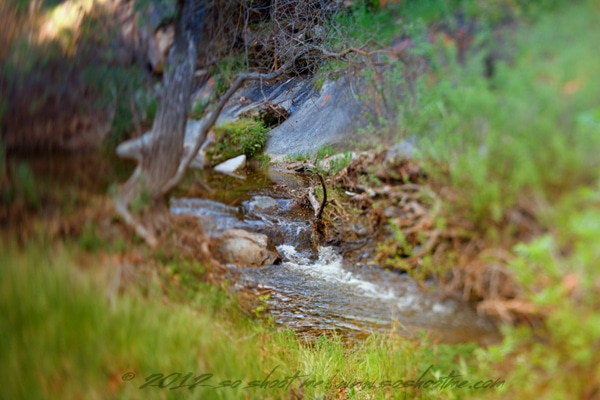 A couple of days ago, I posted an image of my office manager made with my new tilt-shift lens.

This weekend, I was supposed to be shooting a new model. The norm, however, prevailed: you talk to someone who says they wish to model; sometimes you even get far enough (as this time) to set a time and day; and then at some point, the model flakes out “due to an emergency.”

It’s amazing how many emergencies there are in the world of modeling.

At any rate, I took the opportunity to run my motorcycle up into the hills a bit and took my new tilt-shift lens along for the ride. I didn’t have to go far.

The image on this page was made near Humphrey’s Station, located just up Tollhouse Road from where I live.

The effect of the tilt-shift is obvious in one regard: You can definitely see what appears to be a vignetting of focus. This is illusory and if you look closely at the image, you’ll see why.

I’m no expert on the tilt-shift (yet) or how it works, but it’s my understanding that all you’re doing by adding in different adjustments to the lens is shifting the position of the plane of focus relative to the camera’s image sensor. As far as I understand it, there is still a “flat” plane of focus. If you’re shooting at f2.8, you’re going to have a narrow depth of field, which should track that plane. So if I’ve understood it correctly, you can imagine a kind of “swath” of focus running through the image.

Normally — and, again, this is my understanding and I haven’t delved deeply enough to know if there’s more to it than this — the easiest way to think of it is that that “swath” of focused area runs parallel to the back of your camera; i.e., parallel to the sensor. But by rotating, shifting, or tilting the lens (or even some combination of all these moves), you manipulate that.

If I’m right, and viewing the images makes me think I am, you can then, for example, shooting at f2.8, run that narrow “swath” of focused area at something other than parallel to the camera. In some of the images I took, it appears that I’ve managed to almost run it in a path away from the camera — approximating a perpendicular run from the camera’s sensor.

Take the shot on this post, for example. As noted, the shot is from a stream just about a mile or so up the road from Humphrey’s Station. I like Humphrey’s because it’s a nice short ride from my house up Tollhouse Road on the bike. Just enough winding to be fun; not so much as to require attention to the road, making me miss photo opportunities like this one.

If you look closely at the foreground grass — at the very bottom of the image and around about the middle — you’ll see that the grass is perfectly in focus at one point. But moving towards the edges, the grass is out of focus.

Now look from that point up through the water, towards the rock above the stream.

Notice that all of that area is in focus?

That’s the beauty of the tilt-shift.

After that, it’s just a matter of learning how to size and move that plane — what I’ve called a “swath” of focus — to point it where you want in the image.

I can’t wait to experiment with it more on people!